Location: In the optic chiasma (optic nerve fiber junctions) region of the brain, which is located at the front of the brain in the center forehead area.

Vibrations: Agnya vibrations are felt in the ring fingers.
Associated Element: Agnya is aligned with the essential element of air.

Associated Color: Silver or “colorless.” May represent absolute, pure light — unaltered by any source of generation — as well as the evolved ability of humanity to consider its existence outside of the demands/drives of the ego and superego.

Physiology/physical regions governed: Agnya governs sight, hearing and thought (forehead and back of the head), as well as the pituitary gland (known as “the master gland”), which regulates all other endocrine glands and influences growth, physiological maturation, metabolism and sleep and the pineal gland, which secretes the sleep and anti-aging hormone melatonin).

The primary qualities of Agnya are forgiveness, humility and the absence of rigid and unnecessary conditionings within us. It is through this chakra, sometimes referred to as “the third eye,” that we are able to forgive others, as well as ourselves. A balanced Agnya makes it easier to set aside our pridefulness, which makes it easier for us to forgive. Agnya also keeps the ego (thinking, futuristic planning) and superego (memories, conditionings and emotions) in balance.

Through the Agnya chakra, we are granted the ability to achieve the state of thoughtless awareness. Agnya is the gateway to the Sahasrara chakra, which symbolizes the purest spiritual realm of existence. 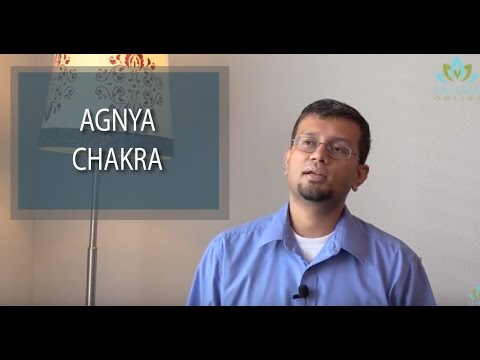 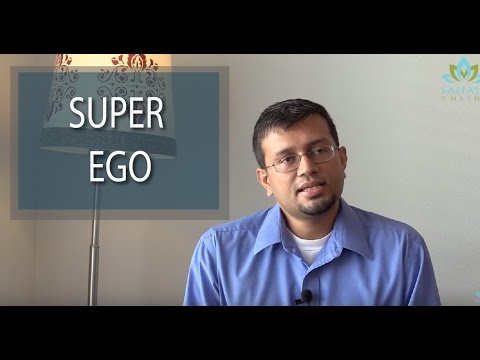 It is through this chakra, sometimes referred to as “the third eye,” that we are able to forgive others, as well as ourselves. The primary qualities of Agnya are forgiveness, humility and the absence of rigid and unnecessary conditionings within us. 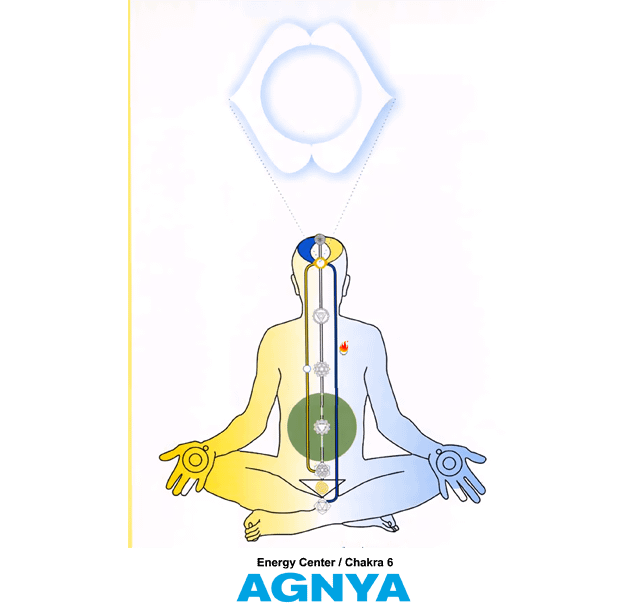 In Sahaja meditation, thoughtless awareness is achieved through the Agnya chakra. When the Kundalini energy passes through the Agnya chakra, the tiny gap between one thought wave and the next elongates so that this space — this silence, or thoughtless awareness — between two thoughts grows larger. This silence spreads outwards, pushing our thoughts to the periphery of our awareness.

Sahaja meditation’s Self-Realization process, which takes the energy up through the Agnya chakra, instills in us humility and the ability to forgive, eliminating the need to “make resolutions” or exert deliberate or forced mental effort. In order for the Kundalini energy to pass through the Agnya chakra at the narrow crossing point of the optic chiasma, you must develop the willingness to forgive others, as well as yourself. Forgiveness, in the end, is about healing ourselves, for an inability to forgive is ultimately self-destructive and only causes us to suffer.

Forgiveness is a character strength that protects us from feeling hatred, anger, resentment or vengefulness toward others. Often, the person you’re forgiving may remain unaffected, but you are freed from the bondage of negative emotions such as anger, resentment and vengefulness. In forgiving, you’ll experience a tremendous sense of peace and relief.

Agnya manifests in sight, hearing and thought. This chakra teaches us that we should respect and be grateful for the gift of sight, through which the beauty of creation is revealed to us. But since Agnya governs our eyes, excessive visual stimulation (e.g., watching too much TV or spending too many hours in front of the computer) can weaken this chakra. Overindulging in intellectual feats can also create blockages and cause us to become egoistical.

Our past — memories, conditionings, habits and emotions — accumulates in the superego in the left Agnya. Aspects of our lives related to the future (such as thinking, planning) and the completion of our actions and accomplishments accumulate in the ego in the right Agnya. These two inflated balloons of our ego and superego channels intersect and cross over at the center of the forehead, or full Agnya chakra. The past accumulates in the left Agnya, which is on our right side. Future thoughts and plans accumulate in the right Agnya, which is on our left side. The left and right energy channels or nadis terminate at the Agnya chakra, thus the only access to Sahasrara, the 7th chakra, is through the central channel.

In our youth, the fontanel area at the top of the head calcifies and hardens, and the connection to the divine, all-pervading energy through the central channel and Sahasrara is cut off. Because of this, our individual identities — our ego or concept of ‘I’ — develops. But unfortunately, as the heart is enveloped by ego, we may gradually lose sight of the Spirit and identify only with the one we call ‘I’.

During the awakening and rising of the Kundalini energy, the two balloons of ego and superego in the Agnya chakra are deflated, which helps keep the ego and superego in check. In other words, we can deflate an overinflated ego and keep the ego and superego in balance by clearing the Agnya chakra through regular Sahaja meditation. Clearing this chakra allows space for the subtle energy to pass into the 7th or Sahasrara chakra to ultimately achieve integration — the capacity to fully understand the meaning and purpose of our lives through our connection to the power that created us. The fontanel, which was calcified and hard, now softens again and opens up to allow the flow the Kundalini energy to unite with the all-pervading divine energy. If there are impurities in the mind, if we cannot forgive others and treat them with compassion, the Agnya chakra may obstruct the Kundalini energy from rising higher into the Sahasrara chakra to achieve integration, the absolute realization of heaven on earth.

Clearing the left Agnya deflates the superego balloon, which increases maturity, flexibility and self-regulation abilities. We’re no longer rigidly attached to our “rulebook” that has evolved over a lifetime of conditioning. We’re re more open to change and new experiences. Our perspective-taking skills evolve. We’re better able to solve challenges through objective reasoning and proportionate, accurate appraisals.

Not surprisingly, aggressive tendencies, as well as all our ambitions for power and domination, emanate from the left Agnya — a result of the ego drive. The ego is also the root of anxiety, worrying about the future, and excessive futuristic thinking and planning. Clearing the left Agnya deflates the ego balloon. And as we become more self-aware, we’re able to observe our own egos at work in a detached, objective manner. We grow wise to the ego’s subtle tricks and manipulations and can even have a sense of humor about it.

When we behave egotistically, we may feel heaviness on the left side of the forehead. The reason is that the ego balloon is extremely inflated and pressing against the edges of the hollow space containing it. Extreme egotism can even cause the ego balloon to inflate all the way down into the left Vishuddhi, which manifests as pain in the region between the neck and shoulder on the left side. Ego-driven behavior can also provoke artificiality. If we come to realize that we’re behaving arrogantly and egotistically, or someone points it out to us, we may be brought to tears or exhibit other melodramatic behavior, along with feelings of guilt — all of which also accumulates in the Left Vishuddhi chakra and causes damage to it.