Location: In the brain’s limbic system.

Vibrations: Sahasrara vibrations are felt in the center of the palm.

Associated Element: Sahasrara is not associated with any one element, as elements are corporeal and the Spirit, which is the ultimate manifestation of the Sahasrara, is not.

Associated Color: White. May reflect the ultimate aspiration of the human condition from an evolutionary perspective — purity is its highest manifest form.

The primary quality of the Sahasrara chakra is integration and a sense of oneness with all elements of the universe. It is through Sahasrara that we experience the connection to the all-pervading divine energy, to the absolute truth. Sahasrara represents our ultimate destination, the absolute realization of heaven on earth. We cannot fully understand the meaning and purpose of our lives until we are connected to the power that created us. 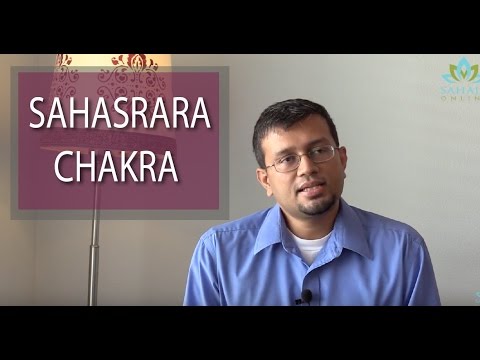 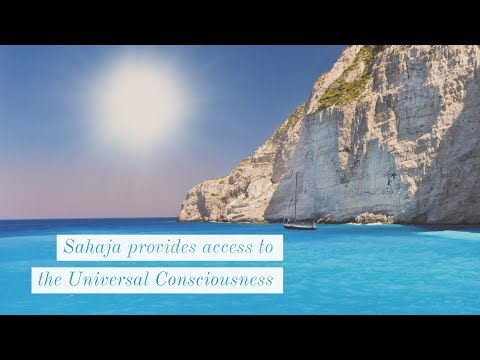 The primary quality of the Sahasrara chakra is integration and a sense of oneness with all elements of the universe. It is through Sahasrara that we experience the connection to the all-pervading divine energy, to the absolute truth. 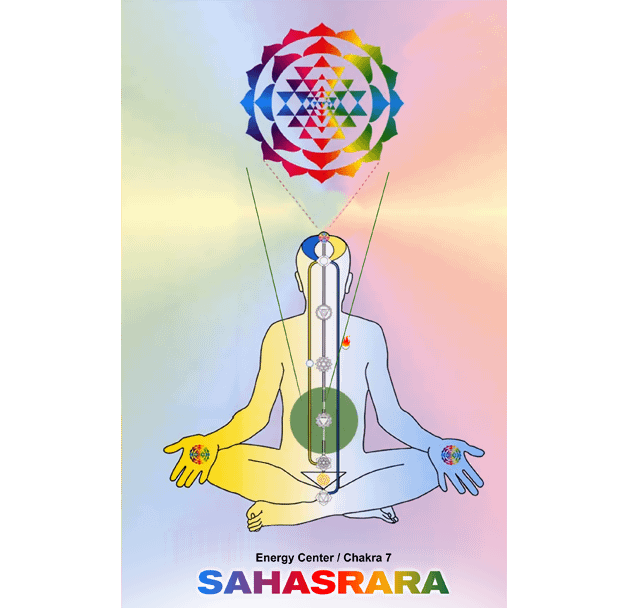 As the Kundalini energy rises, it penetrates each of the other six chakras, ultimately entering the Sahasrara chakra in the limbic region of the brain. Sahasrara is represented by a hollow space in which the other six main chakras can assemble. This space is believed to have one thousand nerves extending from its periphery. When the Kundalini energy enters this chakra, these nerves are enlightened, which can be visualized as a sea of gentle flames that reflect all the colors of the rainbow. This energy then pierces the crown of the head (the area known as the fontanel during infancy) and unites with the all-pervading divine energy — the collective consciousness of the universe.

When the Kundalini energy pierces the fontanel area, it opens a gateway into the cosmos — ultimately into Enlightenment. As the energy connects your individual consciousness (soul or atma) to the universal consciousness (divine power or paramatma), you are suddenly tuned into the universal wavelength of vibrations, which you may experience, physically, as a powerful pulsation in the crown of your head, fingers and toes, followed by a melting sensation and a flow of cool vibrations from the fontanel area (the crown of your head).

As the Kundalini energy rises and enters the Sahasrara, Self-Realization occurs. We enter a new dimension of consciousness that extends beyond the relative to the absolute. We are able to perceive absolute truth. We rise above the past, present and future into a timeless state and experience the pure joy and bliss of the divine, a unique sensation that most of us have likely never experienced before. This threefold, simultaneous integration of enlightened attention, truth and joy is the ultimate outcome of human spiritual enlightenment (referred to s Satchitanand, a much sought-after state of enlightenment according to ancient Sanskrit scriptures).

This awareness also manifests as a tangible ongoing sensory perception, which we can experience, physically, in the form of vibrations whenever we need to distinguish good from bad, right from wrong, truth from falsehood. As our human awareness is united with the divine, we move into the subtlest level of communication, into collective consciousness. In becoming vessels for that universal power, we become one with all other vessels. Every element in the universe emits vibrations, and through vibrations, we learn to appreciate the true depth and beauty of the world around us, including art, nature, other human beings — the possibilities are infinite. We no longer have to judge subjectively; we can judge by vibrations. We are freed from biases, conditionings and the ego-driven pridefulness.

We’ve all developed a moral code that requires us to constantly measure emerging situations against our values. But this new dimension of awareness that we achieve through Sahasrara tells us instantly, through our vibrations, what is morally correct. We are able to simply ask the question we’re seeking an answer to and the answer comes in the form of a flow of cool vibrations. This subtle state is conversation at its most sublime.

Establishing a connection to the universal consciousness through Sahasrara helps us balance the flow and pace of our lives. Often, we find that it as if we are simply being carried along by this powerful natural energy force and that the outcomes we desire seem to happen near-effortlessly. It becomes easier to balance all the aspects of our lives — work, family, health, recreation and spirituality. Our self-awareness reaches a whole new level of sensitivity. We’re able to instantly recognize when rebalancing is required and make the necessary adjustments. It is through Sahasrara that we are able to realize that our inner Self or Spirit — all our mental, emotional, physical and spiritual qualities — are in perfect unison and perfect alignment with each other.

Over time, as we meditate with enlightened attention, we are able to perceive the divine and cease to have doubts about its existence; we are no longer required to accept it merely on faith. This ultimately results in a state of existence known as doubtless awareness — we are both aware of, and in no doubt of, the existence of the divine. Doubtless awareness tends to develop and strengthen progressively through continued Sahaja meditation.

Because all the chakras are integrated in Sahasrara when the Kundalini energy enters this chakra, our physical, intellectual, emotional and spiritual beings become one, and act in perfect harmony. Contradictions and confusions melt away and we can lead a fully righteous life. We experience complete inner calm. We become complete, joyful personalities who do not succumb to temptations and are not swayed by the manipulative influences of the ego and superego. The awareness of the absolute truth becomes a light that nourishes and guides us in our daily lives. Ultimately, it is an eternal light that can encompass the entire world, and you can see the whole world reflected within yourself.